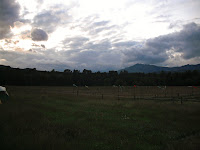 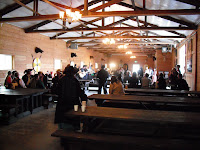 This weekend I went to meet my friend at a Fantasy/Renaissance Faire in Randle Washington and if you've never heard of Randle don't worry neither has anyone else except the five or six people who live there. The faire was actually outside of the town in a big open field (see field at left). The field was pretty empty, they were expecting a lot more people but the possibility of rain deterred many. Their loss!!! 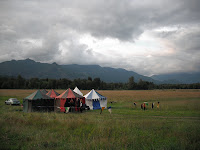 y friend Owen who I was supposed to be meeting. Everyone there was drunk as a lord by the time I arrived and pretty soon I had a bunch of drunken helpers searching for him. Even with all that help I couldn't find him but a nice gentleman from the Seattle Knights by the name of Damien said I could pitch my tent behind their encampment if necessary. They had a nice set-up of colored pavilions but I didn't really know any of them well and was very upset with Owen when he finally woke up (he had been napping in his car). Happily everyone told Owen two or three times that some girl was looking for him, so he was properly chagrined by the time he found me and he helped me drag my tent over by his. 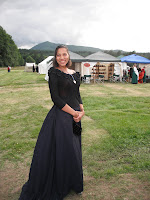 So finally after an hour of wandering around I was ready to get dressed up in my fancy outfit (and believe me that is really difficult to do in a small tent) which consisted of a Victorian corset and bustle and a pretty black skirt and top. It took me a long time to get into and then after one turn around the grounds I decided to change back into my jeans because everyone was predicting a huge windstorm coming in over the mountains. I left the corset on though, because when you spend a couple hundred on something you want to show it off even if it is technically underwear.

Around this time the torchlight ball was supposed to be ge 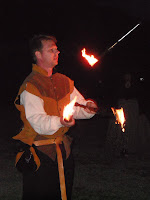 tting started and it was pretty neat I have to admit. First there were some belly dancers (although this got boring pretty quick, really three dances is about as much as my attention span can handle), then my friend Owen juggled some flaming torches! After that was some fire dancing (which also went on a bit long but was pretty cool). The highlight of the show was when 11 people lined up and passed a ball of fire down the line. Around this time a huge shallow metal bowl suspended above the ground by thick chains and filled with wood was lit (my mother assures me that all this is very appropriate for Midsummer's Eve as bonfires were frequently lit and participants would take turns jumping over them, however no one tried to jump over this flaming cauldron as far as I know).

After that we all trooped inside the Dragons' Sphere Inn and the real party began. There was more fire dancing, story telling (a great rendition of the Tell-Tale Heart) a lovely Bollywood style dance with lots o

f hopping (you can see her at left) and some more music and then dancing of a different kind, the performers were taking off all their clothes!!! Although I knew this part of the event was 18 and over I was still a little surprised the first time it happened. I was even more surprised when a fellow in a thong dressed up as Satan did a little erotic performance of his own! All this was a little overwhelming for poor little me and I retired to my tent relatively early, though I heard the next morning that the party continued until dawn. The last performance that I saw was a beautiful woman wearing a bikini made of hinged plate armor who was pouring hot candle wax on herself (my mother also assures me that sex was a traditional part of celebrating Midsummer as well, although I thought sex was supposed to be had on Mayday).

I woke up the next morning feeling like I was the one who had been drinking all night and I was very glad when I made it back to Seattle. It was certainly one of the more surreal things I have ever seen in my life and I've been to Disneyland! If I had it to do all over again I would most definitely go, but I would probably wear a more comfortable outfit! 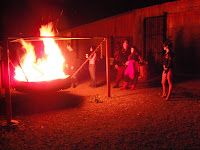 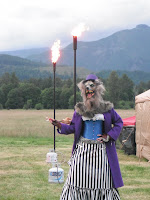 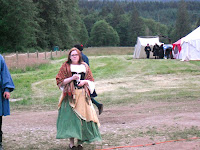 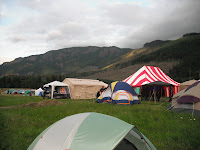