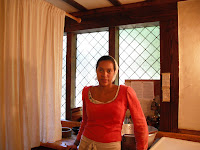 So once again I am working at Camlann Medieval Faire for a few days this summer as a serving wench. It's always fun to take a trip out to the Duvall/Carnation area for this event, however this year the heat has made things really slow. Luckily my trip is not wasted because I use my half hour drive to and from the faire to 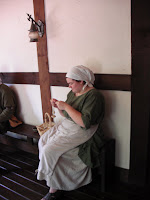 practice my Swahili, I am leaving in 7 days, yikes!

The people at the faire are really nice. Roger Shell is the gentleman who came up with the whole idea and he serves as the innkeeper. Sarah is the cook and Juliana is my fellow waitress at the Bors Hede Inne. I have included some pics of Sarah and Juliana (and the inn). Sarah is wearing green and spinning wool into thread. Juliana is wearing red. I'm wearing red too but I also have an embroidered chemise under my dress. 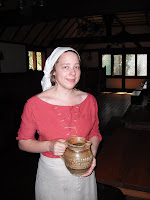 I also have included some pictures of the faire grounds and the feasting hall which is under the inn and rented out for private feasts (weddings, birthdays) as well as seasonal feasts (Yule, Lent, Halloween). The hall has been beautifully painted by Diana Peterson.

There are lots of demonstrations on site from sheep shearing to candle making, plus pony rides! I haven't ridden the pony but I do like to go feed him apples.

It's been fun so far and will hopefully pick up now that it is cooler. 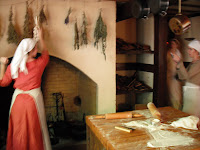 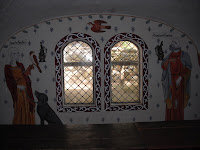 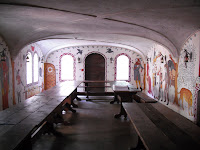 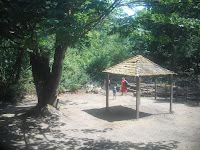