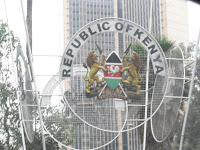 The trip to Kenya is a grueling 24 hour journey in two legs. The planes have a feature in which you get your own little screen on which you can select and watch movies. I watched six different movies: Coraline, Star Trek, Monsters VS Aliens, Miss Pettigrew Lives for a Day, Sunshine Cleaners and Madagascar 2: Escape to Africa. That was a lot of movies!

We arrived in the evening on a Friday and I discover on the drive to our sleeping quarters that not only do they drive on the left side of the road (Kenya is a former British colony, English and Swahili are the national languages) but there seem to be absolutely no rules of the road (cars swerve in and out of traffic wi 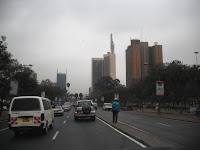 ldly and even drive on the shoulder). Nevertheless we arrive safely at the house of Terry and Margie Jones and their son Isaac. They are friends of my Aunt Cathy and from what I gather they have lived in Nairobi for 12 years or so as missionaries and have dug many a well. They put us up in a little guest house on the back of their property and after a good nights rest I take a shower in the semi enclosed outdoor shower in the middle of the property, a house where their live-in housekeeper Nora lives with her 6 nieces and nephews they also have a groundskeeper, I don’t know if he lives on site or not (apparently everyone in Kenya has servants which gives me a weird feeling of colonialism).

Nairobi is a very dirty city with a lot of poverty in it. It would appear that there are no regulations on car emissions and many of the vehicles here run on diesel fuel so you see many vehicles belching huge black clouds into the air. I especially appreciate the irony of a sky blue truck that says CLEAN WATER on it spewing smog. We spend our time 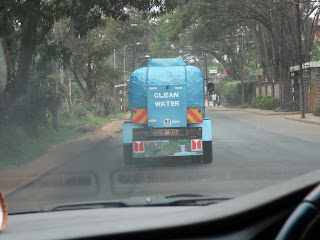 in Nairobi mostly running around trying to get the supplies needed to start the well (despite the fact that Cathy was under the impression that all the supplies would already be purchased). The technique used is one invented by a gentleman named Terry Waller and used by a group called Water For All International (I hope this info is correct). We meet up with a lovely young couple, Jeremy and Sara Boucher who are trained in the WFA method of well digging and spend a lot of time comparing notes with Cathy. We also meet Don and Carleen Loveless who have gathered the money for the project from their church and other sources back in the states and their daughter Gwen (and her husband and kids) who lives in Nairobi. The last member of our merry band is Melchizadeck a native of Kenya and the nicest man you could ever hope to meet. He works for Operation H2O and has a lot of experience drilling himself, he also has a truck which will be really handy for transporting our supplies and later at the drill site water.

All the running around is very dull for me, although I try to stay alert because I would like to understand the method in case I want to try and reproduce it sometime. So far as I can gather it involves using the leaf spring of a car to make drill bits that are like darts. They are welded onto a bolt that goes through a piece of pipe that is wide at one end and narrow at the other creating a one way valve. These are welded onto other pieces of pipe and reinforced so they 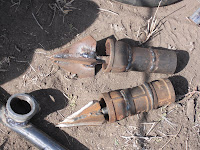 will survive the pressure of the pounding into the ground (especially in case you encounter rock). During all this you try to protect the threads at the end of the drill bit because you will later screw them onto a piece of 10’ metal pipe. The pipe is metal and to add weight to it they cut another piece of pipe into two pieces lengthwise and weld them around the first pipe. We also purchase many lengths of PVC pipe the purpose of which is to add length as you go deeper and deeper into the ground (we of course also need couplings to link all these together) and bentonite a mineral whose purpose seems to be to thicken the water we will pour into the hole so as to help bring up pieces of rock.

Cathys’ luggage did not arrive with the plane so for the first couple of days she has to get by with a limited amount of clothing (I loan her a shirt to sleep in). Another complication in the luggage scenario is that on the day we arrive the Kenya Air baggage handlers go on strike. On Sunday we head to the airport hoping to find Cathy's’ bag. Happily it is there and I get to play tourist for a while as we head 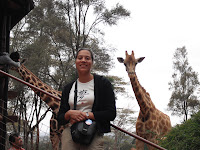 to the Giraffe Centre. It is a rather small place but you get to go in and see Giraffes up close. I even get to feed a giraffe and learn more about the animal. Giraffes are beautiful and have huge long lashes that any girl would envy, they also walk in a strange way moving both legs on the same side forward (you would think they would fall over!) their blood pressure is extremely high (it has to be to get the blood up their long necks to their brains) but is regulated by valves in their necks. There is a big crowd around the giraffe but it takes a pellet from my hand, it has a big purple tongue. There is also a cute little warthog at the Giraffe Centre running around and eating. Warthogs are one of those animals that are so ugly they achieve cuteness, they also feed on their knees, kneeling down to graze.

On Monday morning we discover that the power is out at the location where our welder operates (it is also out at the Jones’ house). To save power the city of Nairobi (and we will later find many other places) has scheduled blackouts from 6 a.m. to 6 p.m.. For the Jones’ they happen Monday, Wednesday and Friday for Gwen they happen Tuesday, Thursday and Saturday so the plan is to gather up the welder and his equipment and meet in Gwen's’ courtyard where he can finish his work so we can leave Tuesday morning as scheduled. With this done Cathy, Don, Terry and I go to gather up a few last important items, water containers, rope and sheet plastic at a store called Tusky's which is sort of like an African Kmart and has the creepiest mannequins I have ever seen. By the end of the day we have accomplished everything we need to do to leave the next morning for Katutu the village in which we will be drilling our well.