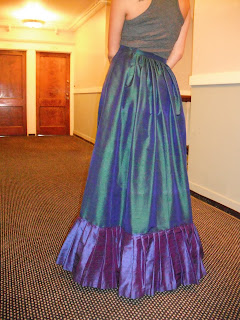 Alright, it is finally time to tell you about the Victorian Opera Dress Project. At some point my interest in Victorian fashion had to take actual form and now that form has a name. I'm not sure what the tipping point was but when I finally had a little money to spare I decided to invest that money in yards and yards of dupioni silk (so many yards of silk, so expensive, sigh).

I decided I would wear my dress to the opera because my favorite part of the opera is the intermission when you get to look at (and talk about) what other people are wearing. In Seattle we just don't get that many opportunities to dress up so one had best capitalize on the ones we do have. Traditionally the intermission was also the most interesting part of going to the opera in the Victorian era for the same reasons, seeing who was with whom and gossiping about it. So the Victorian Opera Dress Project was born

At first the problem was how to pre-treat the silk with one option being dry-cleaning and the other hand-washing. For a while hand-washing was in the lead (once you have chosen a pre-treating method that is the cleaning method you must use in the future and the appeal here was no dry-cleaning bills), but the impossibility of trying to hang-dry 40 feet of silk while living in a second story apartment quickly set in and dry-cleaning won the day. 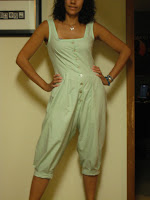 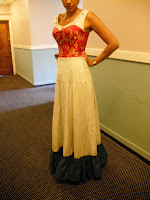 waiting for my silk to come back from the cleaners I started in on the period undergarments which are a must if you intend to wear period clothing for a number of reasons, some of which I will explain as I go along. I made two petticoats using 100% cotton sheets I bought for a song at Value Village. All natural fabrics are important to use because of the number of layers that you end up wearing, they breath more easily than synthetics and will keep you cooler. Lest you pooh pooh my assertion of the importance of all naturals let me enumerate for you the number of layers an average Victorian lady might wear to go to the ball (these are the ones I will be wearing at any rate) starting from the inside out: a chemise and drawers (or combination underwear which combines the two), a corset, a corset cover, a petticoat (sometimes more than one), an underskirt, an overskirt, a bodice, a tra 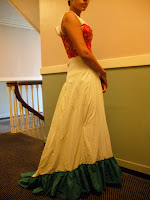 in and a cloak.

The petticoats I made are of two different lengths one a walking length and one with a train. I used a Laughing Moon pattern. The petticoat is important as it gives shape to your skirt (and helps hide the scandalous shape of the "lower limbs" as they were delicately called in Victorian times, the Victorians were notoriously uptight). The rest of my patterns so far have been from Truly Vic

torian which is a great resource for beautiful Victorian era clothing patterns.

I made the combination underwear next. They look awfully silly if you ask me and I am now planning on making a chemise and drawers instead. The innermost layer is really important because it helps keep your body oils off your corset which is very difficult to clean. I have a chemise already which I wear at the medieval fair and which is beautifully hand embroidered (by me of course) and which may be suitable although not historically accurate.


When I got my silk back a frenzy of cutting ensued as I was trying to get my silk down to a manageable length while I had the use of my friends very long living room. Next up I made the underskirt. Once I was almost done with the underskirt I decided that I wanted to add a ruffle in another color which I then had to go buy and have dry-cleaned also. The underskirt turned out fabulously though, although it's interesting how putting the different color up against each other makes them change. What appeared at first to be blue in the main color of the skirt turned green when I added the darker blue ruffle which promptly turned purple. 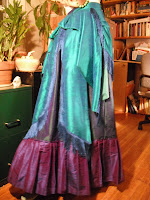 The most recent item finished was the 1872 Side Drape Overskirt which is lined and trimmed with three or four yards of fringe. I don't know if I like all those colors together (although the Victorians probably would have) but the beauty of the pieces is that they are all interchangeable.