Africa Part 2: The Road to Katutu 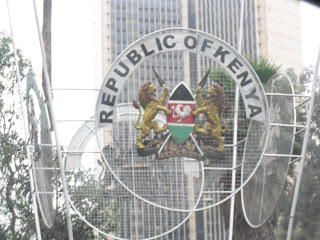 Africa Part 2: The Road to Katutu

We depart for Katutu on Tuesday the 18th of August. By 8:30 we are packed and ready to go but we have to wait for Melchizedeck so we can load up his truck. Things in Africa happen at a different rate of speed than they do in the States (or Germany for that matter), it is something called African Time (which for those interested is very similar to Island Time, Mexican Time or Black People Time). Nothing ever happens when it is supposed to happen so you get ready and then stand around waiting for anything from 20 minutes to two hours (except on those rare occasions when you aren’t ready on time and then the person you are meeting is there exactly on time).

Cathy is very impatient to get going which is funny because she is the one who explained African Time to me, personally I think it will be a triumph if we leave Nairobi by 13:00 hours (we are actually out of the city around 12:00). I am trying to practice patience and tranquility but as you will see it is a lost cause and by the end of the trip I will have achieved only a kind of fatalism (which I don’t think counts).
When Melchizedeck (and his truck) arrive we load up the bentonite and pipes and our luggage which we strap down in the bed of the truck with special care. We make a web of twine over the top of our bags and through the handles because apparently street kids and other riffraff have been known to simply reach in and remove travelers luggage, even snatching cameras and purses from people out of open windows.

After a stop at Gwen’s house to load up the last of the supplies we are on the road. There is a whole caravan of people heading to Katutu: in the truck are Melchizedeck (of course), Cathy, Don L., Jordan (Gwen’s son, I think he is around 10) and me; in a rented van are Sara and Jeremy (the van will also stop downtown to pick up their friends Aaron and Cornelius and Cathy’s’ friends Don and Marian Chang) , in a station wagon that has already departed are Gwen and her mother Carleen , Gwen’s’ daughter Danielle and Rose and Peter (Gwen’s’ household help whose property on which we will be digging the well. Many of us were under the impression that the well would be a community well and we are a little surprised to find out it is for a single household.)

The drive to Katutu is a long one and the roads are not great. Along the way we pass many police checks.
We have walkie talkies but they are of little use unless you are within 100 metres of each other so we end up talking on cell phones most of the time. We will have to stop somewhere to pick up some wood posts with which to build a structure from which to hang the pulley. The pulley will hold the pipe with the drill bit. The top of the pipe has a handle welded on which we will grasp to “throw” the pipe down the shaft. We find wood near Katutu which Gwen and her passengers reach first.

Along the road to Katutu I get a battery for Cathy’s’ extra cell phone so I can make calls of my own. I also get a Safaricom sim chip (Safaricom is a prepaid cell phone service which is huge in Kenya, you see many buildings painted Safaricom green a kind of kelly green color. Many buildings are painted with logos of different products, it’s a free paint job for the residents). I also have my first encounter with the infamous choo (pronounced “cho” like the name of the comedienne Margaret Cho). The choo is nothing more or less than a hole in the ground like an outhouse without the seat. Depending on the inclination of the owner and the aim of the users it can be horrible or sort of okay. In fact Cathy and I end up agreeing that a clean choo is better than a dirty toilet (but out in nature is better than both). Unfortunately I have Obsessive Compulsive tendencies and my first choo is not a good experience (I will be traumatized for the rest of the drive). 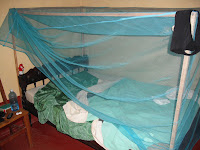 Before arriving in Katutu we make a quick stop in Kapati (Pronounced sort of like cow patty) to drop off our luggage at the place where we will be staying the illustrious Bush Baby Club, a cute little bar with accommodations where we each get our own little room . The rooms have cement floors and cute little beds with turquoise mosquito nets (I insert a sea foam green silk sleeping liner between the sheets to protect me from bed bugs and other ickiness). They also each have their own padlock so you can padlock your door shut to keep everyone out, a feature I like since I hate people touching my stuff.

When we arrive at Rose’s house we are greeted with a nice cup of Chai (milky tea like they serve in India). Rose is very sweet and her mother in law is one of those very tough older African ladies, I think she was in her 60’s but it might have been her 80’s I didn’t follo 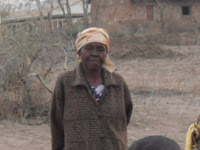 w everything completely. I think her name was Regina (but that might just be because she seemed very regal), it was hard to keep track of names because most people had a Christian name and a tribal name. The well would be very useful so that Regina would not have to walk to get water. Rose and Peter have livestock also (3 cows, a goat and some chickens, which makes them pretty well off apparently) and they need to keep them watered and fed. 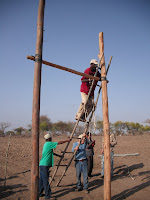 e chai we all head out back to survey the ground and figure out where to erect the poles and crossbar. After the spot is chosen we dig into the ground (this is done mostly using a pointy metal digging stick) and get the poles and crossbar up with the pulley smack dab in the centre (I’m using the English spellings since Kenya was an English colony and the spell things the English way. They also eat “chips” instead of “fries” and use “lifts” instead of “elevators”) the fellows clamber up the poles to do the nailing and tying, meanwhile the ladies gather rocks and dig smaller holes wherein we put sticks to cordon off the area with orange tape.

We make quite a stir with the Kenyan children and the Kenyans in general who all seem somewhat mystified by our actions. The children follow us around everywhere like little tiny paparazzi, except they want us to take their pictures. They also call us “mzungu” which apparently means white person (I’m slightly o 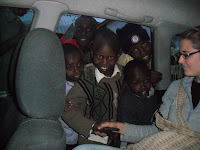 ffended as is Don C. since we are both mixed not white but apparently we are close enough being from America and all). I’m not thrilled with being mobbed, especially by children, because I like my personal space but it’s interesting to be so observed, you start to feel like an animal in the zoo.

Once we have set up at Rose’s we head back to the Bush Baby Club for dinner. Gwen and her mother have spent a lot of time preparing delicious meals for us to eat every night and morning (the one I still think about is the beef and vegetable shish kabobs). After a yummy meal and a nice cup of coffee I am ready to head to my room in large part to escape the drunken attentions of some of the male patrons of the bar who seem to have taken a shine to me (a feeling not reciprocated) and who also keep asking me if they can have some of the food which is not up to me ( I also am of the opinion that if they are hungry they should spend their money on food and not alcohol, I wisely keep this opinion to myself). I climb into my nifty sleep sack, pull shut the mosquito net, apply my Magical Mosquito Repellent ( a homemade moisturizer with added lavender and citronella both known for their insect repelling properties) and fall asleep ready to start digging in the morning.
Posted by S.E.F. at 11:52 AM