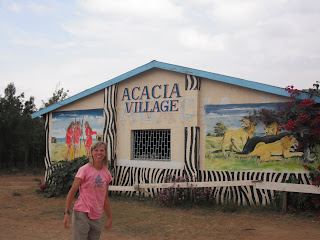 Thursday the 3rd of September and its time to leave Kenya. We wake up early and breakfast with the Changs at the Mara Leisure Lodge restaurant where they have a buffet with an omelet station. While we eat Don shows us a slide show of the pictures he has taken over the last couple of days on his computer.

It’s a long drive from the lodge back to a smoothly paved highway. Along the way we look hopefully for that elusive rhinoceros but alas it is not to be. However we do see 5 people on one small motorcycle and it isn’t the first time, back in Rabondo we were once passed by two motorcycles holding five people each an amazing sight (I believe the motorcycles serve as taxis and I wonder if they charge per person or per mile or both).

We get to the nicely paved road and pass back over the mountains once again looking down into the Rift Valley. We stop along the way to pick up a few souvenirs and I get my mother a little wooden warthog because she says the warthogs don’t look anything like my chihuahua Pepe and I say they do (she thinks the African sun is addling my brain), I think you have to see them in person to understand (when they run their little tails point straight up in the air, very cute). I have nearly given up buying gifts for my mother, she never likes or uses 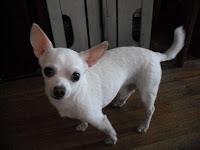 any of the things I give her except for one ring I bought for myself which she now wears all the time. We all find some things we like: beaded jewelry, batik cards, a machete, a shot glass, and Don finds a sculpture of the big five sitting around a table shaped like Africa and sharing a bottle (there is also a giraffe who has somehow crashed the party). From there the drive is pretty quick and we don’t get stopped at any of the checkpoints along the way.

When we arrive in Nairobi we drop the Changs off at their hotel without too much trouble. Unfortunately as soon as we try to leave downtown Nairobi the traffic gets really bad. We drive past the house of parliament (it is forbidden to take pictures of it) and then sit at a roundabout (for what seems like twenty minutes but is probably ten) where we watch two traffic cops texting and talking on their cell phones. Cathy and I try to explain to Stanley that a cop in the U.S. would be fired for texting on the job, but I don’t think Stanley really understands why or even why it is relevant (you also can not take pictures of police in Kenya, maybe this is why) 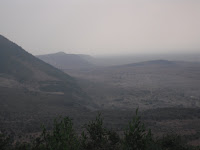 Then on our way to the airport we encounter another traffic jam. The Nairobi natives get creative and decide to turn a four lane highway into a five lane (and even six lane) highway by simply driving across the median and using the oncoming lanes on the other side of the freeway (with caution blinkers on for safety reasons obviously). Cathy and I are dumbfounded (and I must admit I am also slightly impressed) and we once again try to explain to Stanley that in the U.S. this would be highly illegal and that people who did such a thing would be arrested and would go to jail, but Stanley wisely points out that there are so many people doing it that the police can not arrest them all and I am forced to agree. Upon further reflection I don’t think that I have seen a single police car (I saw one police motorcycle) in the three weeks in which I have been in Kenya (I saw lots of police at the checkpoints but never any evidence as to how they got there).

At this point I try to explain to Stanley that there are just some things we don’t do in the U.S. (including cutting in line, which is common in Kenya) which are enforceable not by any actual physical or legal repercussions, but simply by the weight of societal disapproval. Once again I think Stanley doesn’t understand or perhaps see the relevance of the point. It just doesn’t work that way in Kenya.

At the airport in Amsterdam, where we both have a layover, Cathy and I talk about the strange juxtaposition of politeness and complete disregard for rules that characterizes the Kenyan people. For instance when I knocked things over in a little kiosk in the airport in Nairobi (on two separate oc 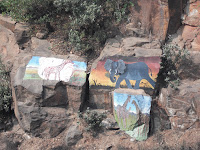 casions) the owners apologized to me as if it was their fault for setting things up in such a way as to make it possible for me to do so, however no one thinks twice about just pushing in front of you in line at an ATM (or anywhere really). In fact at the grocery store both Cathy and I noticed men crowding us from behind, I thought they were perverts but in retrospect I think they were just guarding their spots (and maybe were also perverts). Cathy tells me a story about an incident in which she and a fellow American were walking with Melchizedeck and another Kenyan when her friend was knocked over by a fellow riding a bicycle. The friend was unhurt but nevertheless Melchizedeck and this other Kenyan took the bicyclist into the bushes and beat him soundly. When the Americans protested that the beating was unnecessary the Kenyan said “I was annoyed to the highest degree”. A strange people indeed. The last excitement in Amsterdam occurs for Cathy and I only heard about it later, but apparently a gentleman at her gate stripped off all his clothes and made a break for it, she thinks he was trying to escape his escort who she imagines may have been deporting him, he was carrying a bag of pills so he may have had mental health issues.

Finally let me say how much the Kenyans loved Obama especially the Luos (his father comes from that tribe) and I had to argue with several determined Kenyans who insisted that he belonged to them and would not be swayed by the simple fact that he was born in the United States. I saw Obama on buses, on posters hanging in many homes, on bags, on kitenge cloth and even bubble gum. I will end this narrative with a collection of Obama related images. Enjoy! 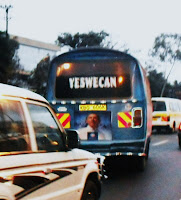 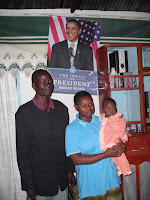 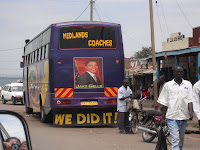 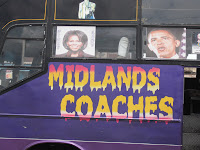 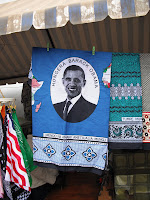 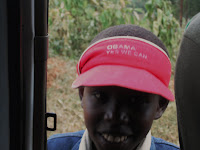 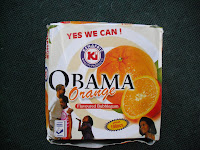