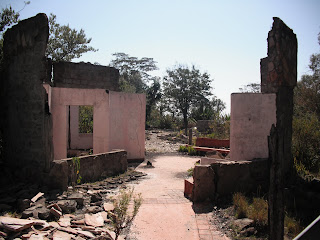 Monday 31st August- It’s time to start out for the Masai Mara. We eat a quick breakfast and are on our way at 7:30. We drive a long time and then stop at a burned hotel (the former Olkurruk Mara Lodge) that overlooks the Trans Mara Park. There is a gate with a Maasai guard who kindly allows us in (I think some “chai” changes hands). We wander through the remains of the structure and finally past it to a really amazing vista of the Trans Mara below. The guard sits picturesqu 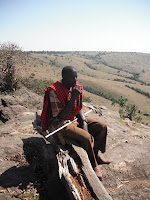 ely on a log and cleans his teeth with a chewed stick (a handy natural toothbrush if you are ever lost in the woods but still concerned about gum health, make sure you choose a non-poisonous species to get your stick from).

Stanley says he used to work at this hotel before the Maasai burned it down. Apparently when the hotel changed hands in 1998 or ‘99 they laid off a lot of people, including Stanley, and at that time somehow the new owners pissed off the local Maasai who burned it down. Don says “so they must have made them very angry” and Cathy replies “no, not re 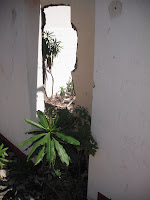 ally.” Apparently a Maasai only needs to be mildly irritated to burn your place of business down. Stanley adds “if you ever hit a Maasai cow you better leave quick because they will kill you if they catch you“. I later ask a Maasai if the story about the hotel is true and he claims not to know anything about it but swears the Maasai wouldn’t have done anything like that (I also check the internet when I get home and find a claim that the hotel was burned down for insurance purposes so who knows). 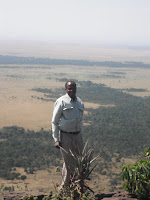 ng road we had to take down to the big open plains below). To avoid being charged for entry into the Trans Mara Park (which we have to go through to reach the Masai Mara beyond) we must put down the top of the safari vehicle (which pops up making it possible to stand and see 360 degrees around you). It is worth the slight feeling of claustrophobia you experience after driving with the roof up to save the $60 USD each so we put the roof down and continue on our merry way. Right away we start seeing animals. There are lots of zebras and wildebeests and they seem to a 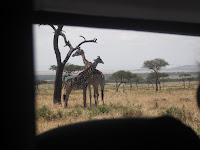 lways be together. It looks like the zebras are herding the wildebeests but probably they spend time together for protection, they even migrate to Tanzania and back together.

We see lots of 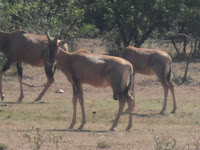 giraffes and we also see some hyenas up very close after we stop over a culvert that happens to be their home (they keep peeking their heads up trying to figure out what we are doing there). Many of the animals have ox-pickers clinging to them. Ox-pickers are little birds that like to hang out on zebras, giraffes, cape buffalo, antelopes and other furry creatures. They go through the fur of their host animal looking for ticks and other pests in a symbiotic relationship that keeps everyone happy. The best part of the morning is when we see some elephants cooling down at a watering hole (see video at bottom, the 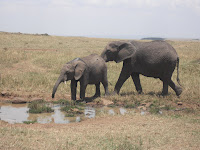 baby elephant is in the bottom right corner you see him between another elephants legs, there is also video of a liones 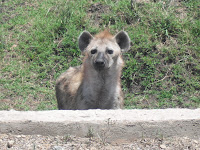 s walking and running zebras and wildebeest). They siphon water up their trunks and then spray themselves like a muddy shower. There is a little baby elephant with them and he gets very frustrated as he has not yet figured out the suction in his trunk. Instead he simply smacks it against the water ineffectually and finally gives up in frustration, it’s really cute and this is all before we even enter the Masai Mara Park!

We stop for lunch at the Mara river and have yummy fruit. The river marks the border between the Trans and Masai Mara parks so up goes the roof! There are very cute mongooses and not so cute black faced vervet monkeys hanging around the picnic area (the male monkeys had very blue balls! see picture at right, another one had a bab 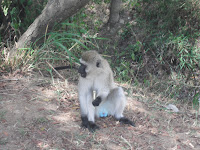 y clinging to its tummy! see picture at left). The monkeys are sort of cute until they start stealing our food. I try to discourage the others from feeding them but they insist the monkeys are used to it and that that it is easiest to just go along with it and throw them food because it w 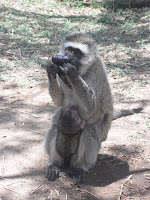 ill make them go away. Of course what actually happens is that more monkeys show up (like the begging children). In fact they eventually become so bold that they steal an entire bag of bananas from are table and take them up a tree. After I go to one of the scariest choos I have yet to see I return smugly with the information that a sign next to it says very plainly not to feed the animals so as to prevent them from becoming a nuisance.

After lunch Stanley takes us to a location where a paramilitary guard will walk you along the river to show you crocodiles and hippos. He will also show you the famous crossing w 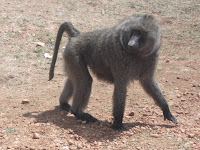 here the wildebeests and 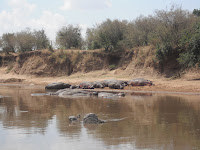 zebras cross the Mara River in a huge stampede to Tanzania where as our guard Tony so euphemistically says they “make romance” and have their young before crossing back. The hippos look simply like big gray lumps no matter how you try to photograph them, but they twitch their ears in a cute way. Tony is very informative and takes the time to tell us about many of the animals habits and how much they weigh and such. He also carries an AK47 which he is nice enough to show us up close. He is extremely casual with his gun swinging it in a jaunty (and slightly unnerving way) and frequently placing the butt of the gun on the ground and leaning with his hand on the barrel. 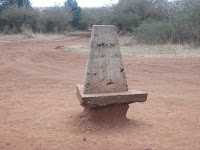 into Tanzania (though there is no stamp on my passport to prove it). We stop at the border between Tanzania and Kenya which is marked by a rather unimpressive monument that has a “T” on one side of the top and a “K” on the other. Here we take pictures, posing inside the safari vehicle and next to it (please note that the picture of me and Cathy in our van was taken by Don Chang). During the course of the day we see nearly all of the “big five” ( the big five= cape buffalo, lion, rhinoceros, leopard and elephant) spotting a male lion and (to my great delight) a leopard (though only very briefly), however we never do find a rhinoceros. 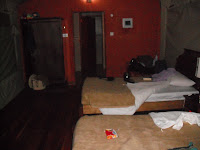 and juice). We were told it was a tent camp but this is the first time I’ve ever seen a tent with a hardwood floor, beds and a tiled bathroom with permanent plumbing fixtures in the back. The first thing I do is take a shower and for the first time since I got here (three weeks!) I feel really truly clean. There is a restaurant that serves fabulous 3 course meals (included in the price, don’t ask how much!) and a small pool (I finally get to wear a bikini!). 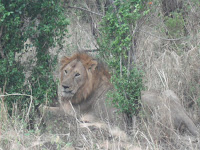 nimals in the park. The schedule is pretty intense (Cathy and Stanley keep up a good pace) although what you mostly do is hurry up and wait, rushing from spot to spot and then sitting with the engine off while you look at animals or hope they appear. Don takes many pictures which also slows us down some as he likes to take many shots. With my short attention span I am bored quickly but I use the down time to update my journal and I spend the driving time standing up with the wind in my face like a dog with its head out the window.

Our last day in the park we spend the morning out driving and in the evening Don and Marian go to a Maasai village while I sit by the pool. As I sit and write in the hot African su 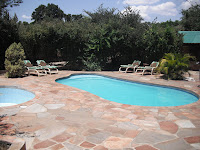 n I can hear the sound of Maasai cattle returning home, the ringing of the cowbells is punctuated by the occasional soft lowing of the cows. The cows we see look so hungry. Kenya is having the worst drought in decades and the Maasai are in mourning for their dying cattle. We even see male sheep and goats with belted flaps hanging around their waists. Stanley calls it “sheep family planning” and as silly as that sounds it is because the Maasai can not afford any more mouths to feed.