The 22nd Saturday morning we head back to Nairobi leaving behind the supplies that the villagers will need to finish the well on their own. Once again we make a special effort to tie down our bags to prevent light-fingered folks from making them disappear. We reach the city in good time and by 17:30 I am showered and feeling much improved. My only worry is a cockroach I see on the door of our hotel room as I exit freshly scrubbed. I go down to the front desk to report the intruder and eventually it is discovered that the cockroach is a long dead husk. Unsurprisingly this does not make me feel better. 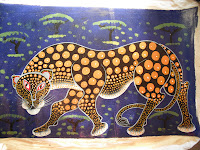 Berlin we take a trip to the Nairobi City Market which is not particularly impressive and very overpriced . It’s fun to take a little trip out of the hotel though and we enjoy the chance to practice our bartering skills. I walk away from many vendors before seeing something I decide I must have. A tinga tinga painting of a leopard at night. The proprietor (a handsome man named Chaz) and I size each other up and then he whips out a calculator (a tool to prevent others hearing our offers and counter offers) and a furious bargaining session ensues. We both enjoy the back and forth and finally I walk away 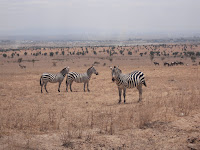 happy and he has every shilling in my pocket.

Sunday we leave for Athi River to check out some land that is a site for a potential well and orphanage. Along the way we see our first zebras and giraffes as well as a wildebeest or two. Unfortunately for Cathy’s friend who owns the land the site is not favorable for drilling but the people there are very nice and feed us our first real Kenyan food (including some yummy stuff called sukuma wiki and a polenta like dish called ugali).

After that tasty meal we are back on the road. We begin an upward climb t 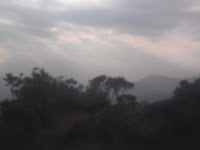 hat takes us over some kind of pass where we look down into the Rift Valley. I notice that in Kenya the higher you go the greener it gets. Along the way we pass many police checks and eventually we are stopped at one. The police checks are mysterious to me in that there are many of them and they all involve two cops standing out in the middle of nowhere with AK47s, spike strips and absolutely no sign of how they got there. Anyway we are finally stopped at one of these by a cop who apparently wants some “chai” (chai is a euphemism for bribe), first he thinks he’s got us because my seatbelt is hidden under my arm, when I prove to be wearing a seatbelt he switches his attention to a tiny crack in the windshield (that is smaller by the way than the insurance tag Melchizedeck is required by law to display). He takes away Melchizedeck’s license and won’t give it back until we give him 200 shillings. I later find out that Kenya had an anti-corruption minister but he was removed from office for corruption.

We arrive in Nak 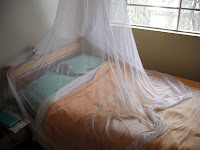 uru very late and struggle for a while to find the hotel but when we do it is lovely. We are reunited with Sara, Jeremy, Cornelius and Aaron and meet some new friends. We are staying at the Hotel Kunste where at the front desk they hand out keys like they are giving away door prizes. I go straight to my room where I get to watch T.V. for the first time in a week and a half. The only channel that isn’t news or sports is the Cartoon Network which I leave on whenever I am in the room even while sleeping.

The next morning we go to visit another potential drill site. This 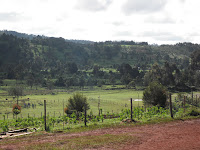 one is at the Janet School which is located up in the mountains where it is lush and green. It is so green in fact that it reminds me of Washington (or more specifically Carnation since it’s farmland and there is livestock everywhere) and it is hard to imagine them being short on water. The conditions here are much more favorable but we decide we are still too short on time and the best thing to do is to set up a test drill at the Lifewater Kenya Samaritan Children Skill Training Center to teach the technique so that others can duplicate it later at the Janet School. 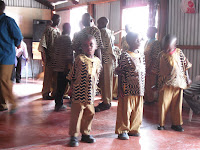 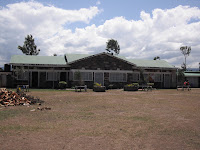 better themselves and contribute to society. At the school grounds we wait for a very long time for food which turns out to be very yummy and then we wait a very long time for a tour of the grounds. Finally there is a performance from the boys who sing and dance. The little boys are especially cute frequently losing the beat and looking around to try to figure out what is going on.

Unfortunately the performance is followed by some very touching personal accounts and then some extremely long speeches and then some individual introductions, plus lots of praying in between. I had hoped to leave the compound and go into the city with Melchizedeck partly because I want to go get some kikoy cloth but largely because I really want some time to myself since so far the only time I have really been alone is when I have been asleep. I’m feeling very overwhelmed and after excusing myself from the room I go out to Melc 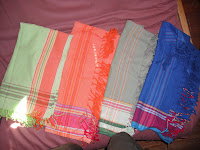 hizedeck’s truck and have a good cry. Poor Melchizedeck doesn’t know what to do, I guess he hates it when women cry and he keeps asking me to stop, meanwhile I am trying to explain to him why I feel so upset. I ask him what he does when his wife cries and he says she mostly only cries when people die which makes me feel pretty spoiled. I ask him if she ever cries about anything else and he says “no because I always make sure to get her what she wants first” and that makes me feel better. At any rate I get my kikoy cloth. Melchizedeck is very relieved and we stop for a Fanta which they have everywhere and he loves. After that he drops me off at the hotel for a cup of chai while he goes to pick up the others. Cathy is worried about me but once I explain how I simply wanted to have a little control over some part of my life she is more understanding. Thanks Auntie Cathy!

The next day I decide to exert that control and stay at the hotel sitting on the veranda and drinking milky, sweet chai and enjoying the flush toilets and friendly staff. Breakfast was lovely: egg with toast, sausage and porridge. I wander down the street to Tusky’s and buy 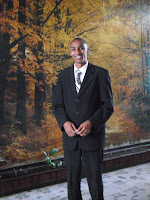 a couple of cowl neck shirts (150KSH=2USD) which I then modify with the cute little folding scissors in my sewing kit (Cathy is amazed that they let them through security). After that a handsome gentlemen named Anthony (you can see him at left, I think he is a kind of concierge) helped me put minutes on my phone. I have been calling home a lot, I miss my mom and Mike and I call frequently although it is difficult to figure out when to call. I finally devise a system where I add two hours to the Nairobi time and then subtract half a day. 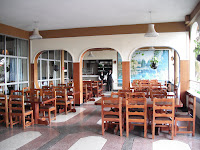 s on the lawn in the central courtyard. The hotel has a play area for kids and a restaurant that is open all day plus a bar (which I haven’t been to). I love the chai but I realize I am not going to lose any weight sitting around drinking tea with huge quantities of milk and sugar. Tomorrow though we will be leaving for Rabondo where we will meet Melchizedeck’s family and stay a little while. After that we will leave for safari. I have already seen giraffes, zebras, wildebeests, warthogs, and dik diks. I wonder what else we will see.

Later that same day me and Melchizedeck go on an epic voyage to try to locate more fabric with little luck. All the places we go want more money for cloth I like less than that at the place we found yesterday (which is sadly closed) but we do have a fun time looking. Only later that night when everyone goes out looking for a nice restaurant for our last meal together do we understand why the shops were closed (the restaurants are closed too). Kenya is doing a census and the stores are closed to encourage people to be home when the “enumerators” come by (even Cathy and I get counted much to our amusement). We do find a Chinese place that is open right next to the hotel and we all spend a nice last dinner around a lazy susan. It is sad to say “good bye” to Sara, Jeremy, Aaron and Cornelius again.

In closing this chapter I want to remark that things are very different in Kenya the AIDS rates are very high leaving behind many orphans. I remember that I saw a billboard in Nairobi that said “Stay healthy, take your HIV/AIDS medications daily” It makes me feel very small for being so upset about something like $10 USD worth of fabric. Those boys I met yesterday have it pretty rough too and if you want to help you can go to: http://www.childrenswaterfund.org/orphans%20kenya.html
Posted by S.E.F. at 4:47 PM