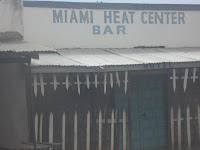 29th August, Saturday morning Melchizedeck, Mike (whom I met yesterday, he helped me buy my tyre sandals), the Changs, Cathy and I, all pile into Stanley’s safari vehicle and set off for Lake Victoria which borders Tanzania and Uganda as well as Kenya. On the way there we pass several amusingly named places such as the “Hotel Shaq Attaq” and the “Miami Heat Center Bar” we also pass many huts with grass roofs and mud walls. Apparently the women make the buildings (from what I gather they do most of the work: cooking, carrying water, building the huts; 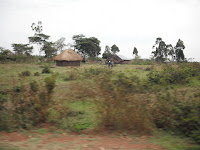 many men spend all their time getting drunk) there are large and small huts and we are told that the small ones are actually for grain storage.

When we get to Lake Victoria we see many naked children bathing in the water and people filling containers with water. This is a little concernful since Cathy has just finished telling us that there are fresh water snails in the lake that carry a parasite that causes a disease called schistosomiasis and that we should avoid getting wet. People also fish in the lake for tilapia and tiny little fish called omena. The omena are very small and they catch them in large very fine nets before drying them in the sun. Cathy has tried them and she says she doesn’t care for them very much. There are lots of animals nearby and I take pictures of some pi 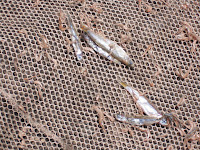 gs sleeping under a truck. There is also an extremely handsome and picturesque young man nearby who I also photograph.

The children at the lake are very annoying. Cathy and the others decide to go for a ride in a boat, Marian and I decline based on our concern about falling in the water and getting sick (I also think it’s a good idea for someone to stay near our vehicle since it has all our stuff in it). The children follow me and Marian everywhere in a flock, like little irritating planets orbiting a sun. Some of them even occasionally dart in to pluck at Marian’s shirt as if she is some kind of celebrity they need to touch. Finally I turn and catch one in the 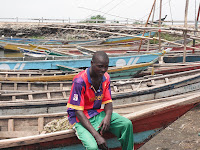 act, I snap my fingers at them and say “stop that” loudly. All the kids jump back frightened and I add a “hapana” which means “no” in Swahili. After that they stay farther back but they don’t go away and whenever Marian tries to take a picture a cluster of little naked boys appear in front of her . As we leave the lake I see a young man with twisted limbs crawling along the ground, I suspect that he has cerebral palsy like Define. I mention it to Cathy and she says there is more need in the world than aid. 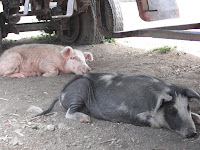 should go to Ruma National Park to see a certain type of antelope that is found only in that one place on earth: the roan antelope. However on the way we stop at what I will call the Happy Infant Complex to check on a well that Melchizedeck helped hand dig and Cathy contributed a generous sum of money to buy and install a pump for. When we arrive the minister tells us that they are not using that well because a church in New York donated lots of money to dig a bigger well and install a pumping system on it. This is good because the compound is a school for orphans, though I never actually see one, and the minister is selling the water to the community for 3ksh per 5 gallon container. We are shown a very large church that has no seats in it the minister says they move chairs in when they need them (which seems odd to me, why would they take them out?). All in all the whole place seems like a prop or a set that is waiting for people to appear. Nobody ever does ask what he did with the money Cathy donated for the pump.

Ruma is a beautiful park very lush and green. We stop at the gate and they tell 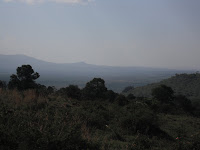 us about the guest house which can be had for 5000ksh per night and sleeps at least eight.. It even has a kitchen and bathroom with a tub (something we haven’t seen since we arrived). But the best part is the view looking down over the park. It’s breathtaking and the idea of waking up and having a cup of coffee while watching the sun rise over the park is mouth watering, but we have Melchizedeck and Mike to drop off so we vow that if we are ever in the area again this is where we will stay.

We do see the roan antelope (see picture below left) as well as a few other animals but it is nothing like the animals that are to come. I also try my first sugarcane which you “eat” by stripping off the green outer part with your teeth and then gnawing on the white fibrous inside to extract the sweet juice (it is very messy and sticky). As the sun sets we head back to Awendo to drop off the guys thinking that we have beds waiting 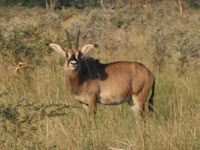 in Rongo, however when we call to check we discover that the rooms may have been given away. I am very frustrated because I know that the Sugarland will be as loud tonight as it was last night and I am adamant about not sleeping over a disco again plus I’m miserable because my throat hurts. I insist I want to go to Rongo where there may be a couple of rooms waiting. Everyone is cranky and me and Don exchange unpleasantries. However Melchizedeck kindly drives me to Rongo and indeed there is a room where I sleep like a baby. Cathy who accompanies me however is not so lucky and sleeps very little, she is very unhappy because she loves to dig wells and this trip was a big disappointment in that regard.

In the morning we see Melchizedeck and Helen for the last time before Stanley comes woth Don and Marian to pick us up. I am very sad to lose Melchizedeck I have grown very fond of him over the last two and a half weeks. We set off for Kilgores the next leg in our trip to the Masai Mara. We stay at the Farmers Lodge after a long drive. During the drive the safari van starts acting up, something to do with the radiator, and we keep having to stop by the side of the road where we stand in the hot sun and get pestered by children until Stanley once again deems the van ready for transport. This happens several times. Finally Stanley fixes the problem in a more permanent fashion by putting curry powder in it. I’m pretty sure that isn’t good for your engine but it seems to work and it makes the car smell nice. 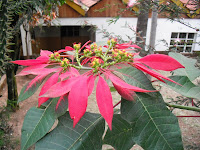 In Kilgores we check in at the Farmers Lodge and after a quick lunch Stanley goes off to repair the van. The Changs head to their room and me and Cathy go for a long walk. We ramble around the countryside looking at flowers and other things, I even see a poinsettia in bloom! We pass many children and pleasantly they no longer yell “mzungu” at us in this part of Kenya, but there is a lot of waving and shouting of “how are you” followed immediately by “I’m fine” without pause for response.

When we return to the hotel the power is out so we sit outside in chairs brought by my new friend William (a member of the hotel staff who takes a shine to me) and write in our journals for a while as the sun sets. Stanley returns in time for dinner and my throat is feeling much better so everyone is looking forward to tomorrow. We should arrive in the Park just in time for an evening game drive. Once again there is a band playing somewhere near by, but I fall asleep with little trouble and the T.V. on.
Posted by S.E.F. at 8:21 PM