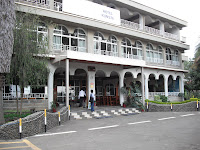 Wednesday 26th August : Our merry band has been reduced to five (Melchizedeck, Don and Marian Chang, Cathy and I) and today we leave Nakuru and head towards Rabondo, I‘m going to miss the Hotel Kunste. As I head up the stairwell to my room for the last time I note in the hallway a poster of Michael Jackson in his Bad era. I might have suspected the poster was recent (as in post mortem) except for it’s extremely faded condition and the fact that there is an equally faded (and random) poster of Sylvester Stallone as Rambo at the top of the stairs.

The way to Rabondo leads up into the mountains and through tea country. Melchizedeck is happy to finally be headed home (to see his wife Helen and his children) and he informs us with cheer that only the top three leaves of each branch are picked (and I assume the branch is then left alone so they can g 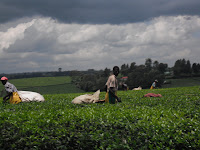 row and be picked again). That seems like a lot of work to me going over each bush by hand picking just three leaves at a time. You can see the workers in the fields carrying huge bags to fill with tea, they live nearby and their houses are supplied by the corporations and look very well kept but extremely uniform. They remind me of that extremely annoying song about conformity “Little Boxes” where there are houses on the hillside that “all look just the same”.

We pass plantation after plantation of tea (the plants have a funny smell that reminds me of skunk cabbage) and stop for a while in Kericho where there is a Tea Hotel. Out on the balcony as we sip our chai and eat our “gateau with suitable sauce” (which turns out to be very dry pound cake with no discernab 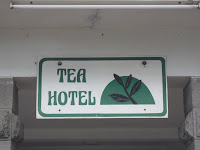 le sauce at all) we see a little monkey hovering around the edges of the patio. At first we find it adorable and hurry to take pictures but soon we discover that he is a little beggar who comes closer and closer scooting in to grab anything dropped be the guests. Don “accidentally” drops some crumbs nearby so we can g 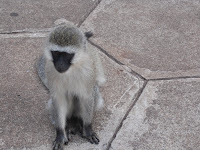 et a better picture. I’m sure many guests “drop” things for the monkey which the staff informs me is a vervet monkey. As we leave the Tea Hotel we pass a sign which says: IF YOU MUST DRINK AND DRIVE-DRINK TEA which I think is stellar advice.

Because of some misunderstanding we are not going to stay in the Guest House in Rabondo so we check into the Sugarland Hotel (we have gone from tea country to sugar land apparently) where my room is full of mosquitoes though luckily I have managed so far not to be bitten. I am frightened of the bathroom and decide I will have no part of it aside from the toilet (which turns out to leak every time you flush, eventually they switch me to a different room with an equally scary bathroom). The electric showerheads are known as “widow makers “ according to Cathy and apparently will give you an electric shock if you make contact with them. Besides which they are just hanging right in the middle of the room with no curtain or anything.

Upon waking the next day Cathy and I decide to go for a walk around town. For some reason a strange gentleman takes a shine to us and follows us around town singing and talking to himself. Even though we ask he won’t leave us alone, Cathy tells me that he is probably mentally ill and needs medication. Yesterday I noticed that my throat felt a little tender and 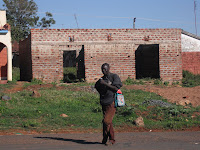 unfortunately it will remain that way getting worse and then better throughout the time we are in Rabondo. Since my throat is fine by the time I get home I never go to the doctor which means we never do find out what the heck was wrong with me (we suspect tonsillitis since I am on an antibiotic which would tend to rule out strep) but it makes eating and even drinking painful and difficult for a few days. I eat very little for a while although the food here is wonderful.

Today we are going to drop off an all-terrain wheelchair that has been shipped in legs from the U.S. for a girl here in Rabondo who has cerebral palsy and can not walk. Her name is Define (pronounced duh-fee-nuh) and her family lives on the side of a hill and is having trouble getting her around. They are all excited when the wheelchair arrives and once she has been placed in the wheelchair and wheeled up and down the hill we are invited inside for formal introductions. They go around the room introducing the family and welcoming us to their home. After they are done I introduce myself, say where I am from and thank them for welcoming us into their home, Don and Marian do the same. This seems to work. 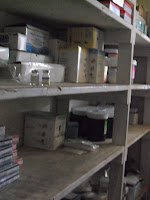 ed by all the good Cathy has done in Africa and especially in Rabondo, she works tirelessly. After dropping off the wheelchair and stopping for some of Helen’s yummy Chai we stop at a would be clinic that is not a clinic despite many donations (I‘m not clear on what 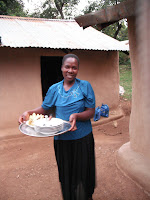 is going on there but I do get the impression that there are opposing forces at work in the community that might be holding things up). Next door is a dispensary that fortunately is open and stocked, although they are still in need of donations to buy medications. The friendly nurses show us their medication supplies and the birthing room. I jokingly ask them about my throat thinking someone there might look inside my mouth, instead they just hand me some antibiotics and pain relievers which I give to Melchizedeck later (for his kids in case they need them). At his house that evening we have curried eggs, rice and sukuma wiki. Helen is a superb cook (you can see her at left) and I do my best despite the pain in my throat. 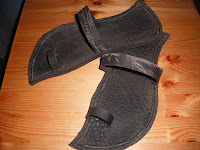 h a woodworker at work. In front of the shop are many caskets in different sizes and colours. It reminds me of the fact that since Cathy was here a year and a half ago at least three people she knew have died, many of them from lack of medicine. When Cathy is done we head off to market trying to find a bank and my tyre shoes. As we wander I learn that many of the clothes that we donate to places like Goodwill and Value Village in the States are packaged in bales 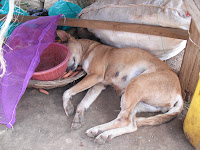 and sent here for purchase and resale. Some of them are nice, I find a pretty skirt with pink hibiscus on it that I really like. We see roosters and hens with their feet tied together, a dog sleeping with his head in a basket of carrots and many cars, trucks and motorcycles all hooting (honking) away.

Later we run a few more errands and check out Melchizedeck’s tilapia pond. Melchizedeck is very industrious (he even has his own sugar cane fields). I’m pretty miserable throughout the day (my throat hurting very much) and I really just want to be back at the hotel lying down but it is interesting to travel around the area seeing the wells that have been dug (I think by Cathy and Melchizedeck). Most interesting is a hand dug well in progress with a man at the bottom. I think it‘s neat because you can see the different layers of rock on the way down. He is 35’ below us and chipping away at rock with a pickaxe. I shout “hello“ down to him and he “hellos“ back. Every once in a while they lower down a bucket which he fills with rocks and sends up.

However clearly the most entertaining thing we see that day is a very drunken gentleman who calls himself Mr. Fantastic (he gives many other names as well). He climbs in the cab of Melchizedeck’s truck and won’t get out. He wants us to run over cows and shouts “over knock” every time he sees one. He leans over and tries to talk to Don through the open side window, his breath is smelly. He admits to Cathy that he has been drinking as he waves an empty bottle around and Cathy is monumentally unsurprised. When we get to the well, Melchizedeck starts pumping away to show us the water and “Mr. Fantastic” lays directly under the spout to get a sip heedless of his clothes (such as they are). When he tries to talk to me I give him a lecture on the evils of drinking, tell him it is possible to stop and recommend AA but I think it goes over his head because immediately afterward he tells Melchizedeck he likes me. He follows us everywhere until finally after telling Marian that he doesn’t like white 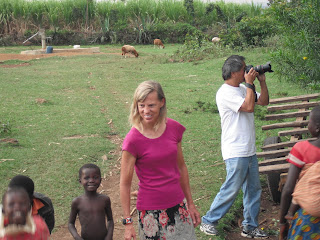 people he leaves (we later find out that Melchizedeck gave him 20ksh to go away and get alcohol). I kind of miss him, he was pretty entertaining.

That night in my room I discover that I am sleeping over a live band. I think about dressing up and going dancing (if you can‘t beat ‘em join ‘em) but I’m guessing I can’t talk Cathy into going with me. You would think the noise would be a bigger problem but I’m so tired that I manage to sleep anyway. Stanley our safari driver has showed up and after a day trip tomorrow to Lake Victoria and Ruma National Park we will be off to the Masai Mara. Starting tomorrow it really is a vacation!!!
Posted by S.E.F. at 11:54 PM